You are here: Home / feature / A Salute to Service | SGT. STUBBY: AN AMERICAN HERO, Veterans Day 2017

Through the art of animation, we honor our military’s valorous legacy and open a gateway to historical exploration for audiences of all ages.

The cast and crew of SGT. STUBBY: AN AMERICAN HERO salute all who have served in this special Veterans Day video, featuring interviews with the film’s stars, score snippets by composer Patrick Doyle, and never-before-seen animated footage! 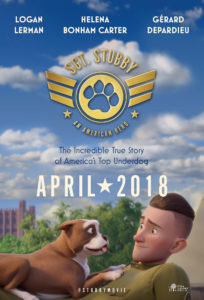 SGT. STUBBY: AN AMERICAN HERO is a computer-animated feature film based on the life and times of America’s most decorated dog. After being rescued off the streets by a young Soldier on the eve of World War I, Stubby became the first canine promoted to the rank of Sergeant in American history.

With The War to End All Wars looming, a young Army “doughboy” Robert Conroy (Logan Lerman) has his life forever changed when a little dog with a stubby tail wanders into training camp. Conroy gives his new friend a name, a family, and a chance to embark on the adventure that would define a century.

Narrated by Robert’s sister Margaret (Helena Bonham Carter), Stubby and his new best friend quickly find themselves in the trenches of France and on the path to history. French poilu soldier Gaston Baptiste (Gérard Depardieu) befriends the duo and accompanies them along their epic journey through harsh conditions and incredible acts of courage.

In combat, Stubby alerts his comrades-in-arms of incoming attacks, rescues the wounded in No Man’s Land, and keeps the trenches vermin-free. Back home, his exploits steal the heart of the nation on the front pages of newspapers across the country.

Sgt. Stubby’s actions show the world the true meaning of dedication, loyalty, and what it means to be an American Hero.

Every November 11, we celebrate Veterans Day in the United States to honor all who have worn the uniform of the United States armed forces: current and retired, living and deceased, those who saw combat and those who served during peace time, active duty and reserve components.

11/11 is a day of parades, service industry discounts, and volunteer projects. But all of our lives are impacted daily by current and former military members…our schools, offices, even families are filled with inconspicuous vets who don’t talk about their service.

So what can we do?

Ask the questions. Record the stories. Provide support for painful memories. Teach the next generation what it takes to protect and defend our society.

And above all, say thanks.