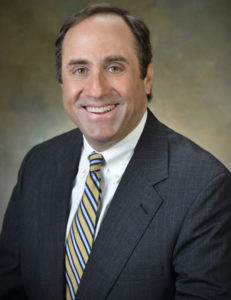 A Columbus, Georgia native, Rob Poydasheff graduated from The Citadel in 1983 with a BA in Political Science and earned his Juris Doctorate in 1986 from the University of Georgia Lumpkin School of Law.

After law school, Rob served as a JAG officer in the United States Army, stationed in the Federal Republic of Germany as a Trial Defense Attorney where he practiced international law, family law, and criminal law.

After Rob’s tour of duty, he returned to Columbus where he worked for Synovus, a regional banking institution. Rob held many positions at Synovus over twenty years with the bank including commercial real estate lender, founder and managing director of Synovus Leasing Company, managing director of Synovus Financial Institutions Group, and senior vice president of regional risk management.

In 2011, Rob left Synovus for private practice as a partner in Harp and Poydasheff LLC, specializing in real estate (commercial and residential) and transactional law, including contract negotiations, mergers and acquisitions, and intellectual property management.