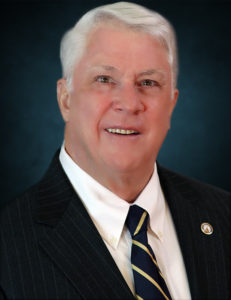 Joe Wilkinson was first elected to the Georgia House of Representatives in 2000. In the House, he chaired the Ethics Committee and served on the Economic Development and Tourism, Health and Human Services, and Insurance committees. He also served on the Judiciary Committee as an Ex-Officio member.  He retired from the House on January 9, 2017 after 16 years of service.

Joe is a fifth generation Atlantan who graduated from North Fulton High School and the University of Georgia. He was the University’s first intern to the Georgia General Assembly working for the Republican Minority Leaders in the House and Senate.

He served Presidents Ford and Reagan as a member of the White House Press Office. He accompanied President Reagan on overseas trips to France, Honduras, Japan, China, England, and Belgium and attended the Economic Summits in France and England. He was a senior member of the Bush-Quayle Inaugural Committee and coordinated the hosting of the Washington, DC-based diplomatic corps for the inauguration.

Joe is retired from the United States Naval Reserve. He attained the rank of Captain (O-6) and is a veteran of Desert Storm.

Joe has served on numerous non-profit boards including The Atlanta Community Food Bank, the Metro Atlanta Crime Commission, USO of Georgia, the Arts Festival of Atlanta, the Tommy Nobis Center, the Georgia Council for International Visitors, Sister Cities International, Atlanta International Family Services, and the Mighty Eighth Air Force Museum. He was appointed by Atlanta Mayors Andrew Young and Maynard Jackson to the Atlanta Council for International Cooperation. He is an Advisory Member of the Board of the Jekyll Island Foundation and the Georgia World War I Centennial Commission.