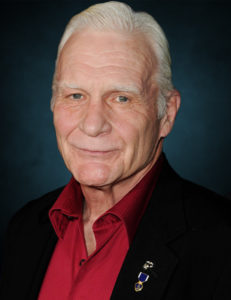 Our man in Hollywood, Captain Dale A. Dye, USMC (Ret.) is a highly decorated veteran and international entertainment industry technical advisor. He has worked with the biggest filmmakers in the industry including Steven Spielberg, Oliver Stone, Robert Zemeckis, Terrence Malick, and Brian De Palma.

He graduated as a cadet officer from Missouri Military Academy, but lack of funding led Dye to enlist in the United States Marine Corps in January 1964. He served in Vietnam in 1965 and 1967-1970, surviving 31 major combat operations. He returned from Southeast Asia highly decorated, including the Bronze Star with “V” Device and three Purple Hearts. He spent 13 years as an enlisted Marine, rising to the rank of Master Sergeant before he was chosen to attend Officer Candidate School. Appointed a Warrant Officer in 1976, he later converted his commission and was a Captain when he was sent to Beirut with the Multinational Peacekeeping Force in 1982-83.

Determined to improve the realism of how combat is depicted on film, Dye moved to Hollywood in 1985 and launched a successful career as a military technical advisor. His first major production, Oliver Stone’s 1986 film Platoon, garnered accolades including the Academy Award for Best Picture.

As an actor and advisor, Dye’s filmography contains some of the biggest titles in the last 30 years including Born on the Fourth of July, Forrest Gump, JFK, Mission: Impossible, Wag the Dog, The Thin Red Line, Saving Private Ryan, and Alexander. Dye also appeared in the groundbreaking HBO series Band of Brothers.

Dye’s voice is also familiar to video gamers and animation fans, lending his talents to the Medal of Honor game series and the star-studded Disney film Planes: Fire & Rescue.